I can’t believe it has taken this long to address one of the most confusing aspects of modern (1950 and newer) United States currency.  We get lots of calls from excited people who have just found a rare misprint that looks like a Chinese character or other odd marking directly on their banknote.  It is only natural to assume that these are valuable errors that somehow occurred at The Bureau of Engraving and Printing.  Sadly, that is never the case.  You have to remember that currency is printed using engraved plates that are made by a team of engravers.  The plates are thoroughly reviewed for defects before being used.  It would be absolutely impossible for a strange character to get printed on a United States banknote.

What you are seeing is actually called a chop mark.  Chop marks are added by foreign banks, casinos, and other money changers to confirm the authenticity of the currency.  Each institution has its own chop mark.  They are usually very small and some are similar in color to the banknote printing colors, so it looks like something that could have been printed.  We are showing just a couple of examples below.  There are literally thousands of different styles out there.  A chop mark never adds any value to currency.  If they were on $1 bills then they might be fun to collect.  However, they are usually found on denominations of $20 and higher.  The high face value prevents them from being collected for the sake of curiosity. 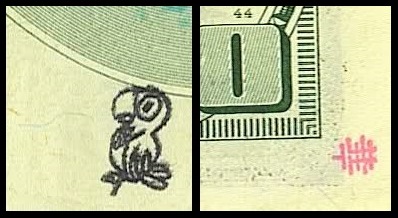