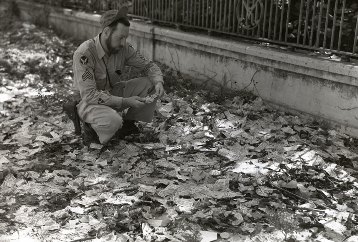 This is the most common currency from The Philippines that the average person is likely to have.  Collectors call this Japanese Invasion Money, or JIM.  These were brought home by the hundreds and thousands by servicemen serving in the Pacific during World War II.  Japan captured the Philippines Islands in late 1940.  In 1941 they used all of the Philippine money, coins, and U.S. currency that they captured on the island to buy supplies for their war effort.  In place of the hard money they stole, they issued their own Japanese Government centavos and pesos.  The denominations were as follows:

Everyone in the Philippines knew this money was absolutely no good.  If it traded it all, it was at a steep discount.  The picture at the top right of this page shows where this money was literally lining the streets.  It was absolutely worthless then, and most of it has virtually no value now.  They are interesting items as pieces of history.  However, don’t expect to be able to sell them for very much money.  There are two exceptions to that rule:

This is really the only piece of JIM (as it relates to the Philippines) that is going to sell for decent money.  One hundred pesos notes are actually quite scarce.  The picture below shows what these look like.  There is another 100 pesos note that is virtually worthless.  For yours to be collectible it has to look like the one pictured below.  We also understand that there are higher denominations like 500 and 1000 pesos notes out there.  They are also extremely common.  The 100 pesos note is the only one that matters.

This is another subset of JIM – (Japanese Government Pesos) that can actually be collectible.  The phrase “The Co-Prosperity Sphere: What Is It Worth?” is stamped on the back of some one, five, and ten pesos bank notes.  These really have to be in perfect condition to sell for good money.

I hope that helps.  If you have one of the rare 100 pesos notes (shown above) or a bank note with the Co-Prosperity Sphere overprints, then send us an email and tell us about it.  We would be interested buyers.  We not buy any other Japanese Government pesos bank notes.