Value of Series 691 One Dollar MPC

At first glance, the series 691 one dollar military payment certificate looks like the earlier 541 series. That is because the exact same designs were reused here. They of course had to incorporate the same text “for use only in united states military establishments by united states authorized personnel in accordance with applicable rules and regulations.” This is where we would normally list the countries in which $1 series 691 MPCs were used. However, these were never actually released into circulation. All of the known examples were saved from destruction by the same individual who probably made a small fortune selling them. If you have one, please let us know. We are interested buyers. 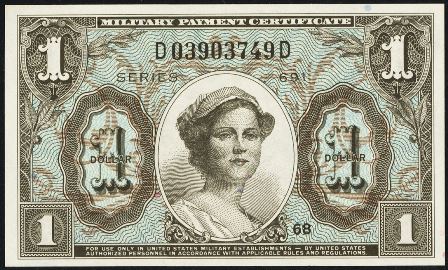