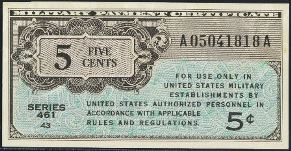 Military Payment Certificates (MPC) were issued from 1946 until 1973.  They were printed in fifteen series and used in 22 different countries during that 27 year period.  The denominations issued range from as little as five cents all the way up to twenty dollars.  Military payment certificates were intended to be used by members of the United States military who were serving overseas.  That means that U.S. MPCs can be found all over the world today.  They have been very well researched.  In most situations we have records of exactly how many were printed and we usually have a pretty good idea of how many are still known to exist.  This makes collecting military payment certificates fairly easy.

Why Are Some MPCs Very Rare?
Military payment certificates are really starting to get a strong following as a legitimate type of collectible paper money.  They are really the newest type of paper money that is considered collectible.  The bad news is that about 97% of MPCs are extremely common (like worth less than $5).  However, some can be rare.  Military payment certificates are not good at their face value today.  Each series was devalued when a new one was issued.  Of course the soldiers and other personnel didn’t want to get stuck with worthless money.  So there was an extremely strong incentive to exchange your old series for the new series.  Typical survival rates don’t apply to military payment certificates like it does to other currency.  Something printed relatively recently and in high numbers could actually be very rare because most would have been destroyed on conversation day.

We have more value information on other pages.  However, we can give you some quick tips to know whether or not your MPC might be rare.  So the first thing you want to look at it is the serial number.  If the serial number on your bill does not end with a letter then you have what is known as a replacement note.  Some replacement notes can be especially rare.  Feel free to contact us directly to find out exactly what your note is worth.

As you can see, it is really only the higher denomination MPCs that have the chance to be rare.  Of course any replacement serial could be a keeper, even on lower denominations.  However, nothing under than $5 denomination will ever be a super rarity on its own.  Keep in mind that condition is still very important when you are dealing with military payment certificates.  Even extremely common notes can be worth decent money if they are in absolutely perfect condition.  For example, the value of the most common MPC might be $1 in average condition.  However, the price could be as much as $40 if it is gem uncirculated.  Simply put, there is a demand for high grade common notes and there is virtually no demand for low grade common notes.

Do fake MPCs exist?  Yes, lots of contemporary counterfeits were made.  These were not produced to deceive collectors.  The ones that still exist were meant to be used at face value in commerce when military payment certificates were still circulating. You are more likely to see counterfeits on the higher denomination notes.  Most counterfeits are of very poor quality and not at all deceiving.  The people making MPC counterfeits were the citizens of the country in which the U.S. military was stationed.  They saw it as an easy way to make a profit, especially when their home country’s currency was likely close to worthless.  Fakes are pretty easy to spot because they will be lacking the red and blue colored planchettes found in authentic notes.  The serial numbers also almost always the wrong font as well.  Details and colors can be slightly off, which is standard on many counterfeits.  If you think you might have a fake, then send us an email with pictures.  We can quickly tell you if your military payment certificate is authentic.

It is rare to find significant errors on MPCs; but they do exist.  Inverts and cutting errors are about as extreme as it gets in terms of misprints.  You will also occasionally see specimens of military payment certificates.  Those are also extremely rare.

Want More Information About Your Military Payment Certificate?  Below you will find more price and history information.  You can also always contact us directly via email.  Just remember that we can’t help with any appraisal information over the phone.  We have to see pictures of what you have.  Sales@AntiqueMoney.com