One great thing about collecting United States currency is that you so rarely have to be worried about counterfeits.  Most true counterfeits were made at the time of circulation to deceive people in commerce.  In other words, you created a copy of an 1863 $5 bill in 1863 to try and spend it for $5.  Virtually no counterfeits are made today to fool collectors.  Of course the same can not be said for coins.  The majority (probably 99%) of contemporary counterfeits were made in the 1860s.  The symptoms of a contemporary counterfeit are font issues, serial number range inconsistencies, and artificially circulated paper.  Here is the scary thing, some 1914 $100 blue seal federal reserve notes are virtually undetectable as counterfeits.

If you have an Fr. 1092 $100 blue seal from The Federal Reserve Bank of Philadelphia, then you need to examine it closely.  It could very well be counterfeit.  We have four of them pictured below.  We were honestly only able to tell these were counterfeits based on the context clues.  The owner is in Europe and the notes show signs of circulation despite obviously being from a nearly consecutive serial number range.  The serial numbers fall neatly inline with other known counterfeits.  I wish there was some some trick or piece of advice I could give you as to how to spot these fakes.  Sadly, I can’t though.  You just need to be aware that these are out there. 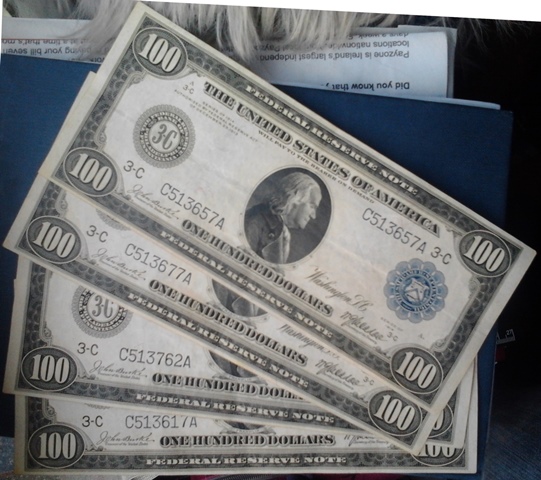